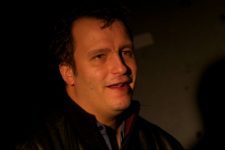 I am Alain English, and I joined Stealth Aspies in it’s first year in 2017.  Paul Wady, whom I have known on the autism circuit for many years, approached me with the idea to do the show.  The themes of ‘Stealth Aspies’ tie in with my current work as a poet and workshop facilitator.  I believe this show is important, and I am glad to be a part of it’s going process.  My work with Stealth Aspies consists of performing on stage, helping to promote the show wherever we do it, and I also help develop and organise the material we perform.

I was born in Alexandria on the coast of Loch Lomond, Scotland in 1982.  My family moved to Aberdeen on the North-East coast about three months after I was born. My younger sister Yvonne was born two years later in Aberdeen in 1984.

I count myself very lucky to have been born into a loving and supportive family, who taught me responsibility and respect for others, as well as backing me up with everything I do.  Nonetheless growing up was challenging and difficult, as it is for many people on the spectrum.  I had the common experiences of bullying, isolation and mental health problems.

In 1992, I joined the Aberdeen Scout Gang Show and developed a love of acting and performing that has stayed with me throughout my life.  When I was fourteen, I met Annie Inglis, a speech and drama teacher in Aberdeen.  She introduced me to Shakespeare and the Aberdeen theatre scene, and later trained me to apply for drama school.  Annie passed away in 2010 and I miss her to this day.

I was diagnosed with Asperger’s Syndrome aged sixteen by a psychologist I was seeing in Aberdeen.  The diagnosis only came about when I handed the psychologist a summary of my life up until that point, as well as a list of patterns I had noticed in my own behaviour.  My parents did not tell me about my diagnosis initially, and it was only after I came home drunk and humiliated from a student party that I learned about my condition.

In 2004, I graduated from Robert Gordon’s University with an Honours Degree in Publishing Studies, and later moved to London where I gained a Postgraduate Diploma in Screen Acting from the International School of Screen Acting.  Although I trained at a screen acting school, my experience before and since training has mainly been on stage.

In 2007, I discovered poetry and starting writing and performing my own material in venues all across London.  I later founded and ran a poetry night called Paper Tiger Poetry and have published a memoir and two volumes of poetry.

The acting roles I have played include King James in “5/11” and Mark Antony in “Julius Caesar” (both Network Theatre) as well as the Hotel Porter in “The Ritual Slaughter of Gorge Mastromas” (Sedos Theatre).  In 2017, I played William Butler Yeats in “The Playboy Riots” (Bread and Roses and Hen and Chickens Theatre).

Living in London has not been without it’s difficulties.  I struggled for a long time with unemployment and living independently.  I have also to deal with mental health issues, discrimination and even hate crime.

I work with support workers instructing them about supporting people with autism/Asperger’s Syndrome, and have recently expanded this into training employers.  I am Artiste-in-Residence at the Tea House Theatre in Vauxhall, where I founded Paper Tiger Poetry and regularly perform in rehearsed readings and shows, his most recent of which was ‘Auld Acquaintance: Sylvander and Clarinda”, about the love story of Robert Burns and Agnes McLehose.